An Update on the Rolling Jubilee

The Rolling Jubilee has struck a chord around the country and the world, giving rise to a remarkable outpouring of goodwill and support. The fund has exceeded our wildest expectations. We set out with the goal of raising $50,000 in order to abolish approximately 1 million dollars worth of debt. Thanks to your generosity, we have thus far raised over ten thousand donations at an average of forty dollars each, totaling $480,000. This is enough to abolish nearly ten million dollars worth of debt.

Along with donations to the fund, we have also been overwhelmed with both letters of support and devastating stories of how the predatory debt-economy impacts people’s lives. We are at a moment when these individual experiences of grief and suffering–shared by millions around the country–are beginning to translate into a collective political consciousness about the immorality of the debt-system overall.

At the cost of $5,000 dollars, we have now successfully eliminated $100,000 of debt owed to creditors who profit from people’s sickness and suffering. Letters to 44 debtors will be delivered in specially wrapped holiday packages, designed to catch the eye and pique the curiosity of recipients. Nick Pinto has the story in the Village Voice. 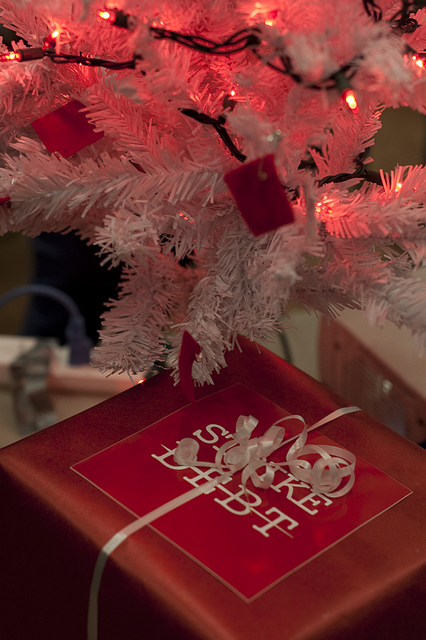 The debtors whose debts have been abolished have been given our contact information and information about Strike Debt and the Rolling Jubilee. If any decide to come forward and share their stories publicly, we will let the world know. 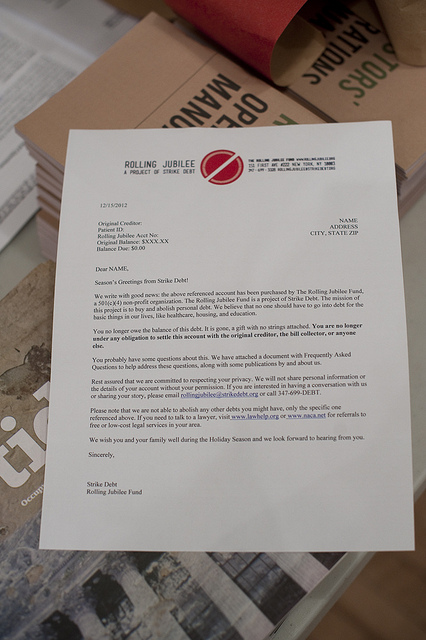 The Rolling Jubilee is only one tactic in a broad campaign against the debt system. On Dec. 16, Strike Debt held an Open House to welcome new and old friends into the debt resistance movement. Here are some photos from the Open House, the first in a series of events to be held each month in NYC.

For more information about our latest debt purchase, here is the redacted agreement documenting our Nov. 12 debt purchase, and here is a sample of the letter we sent to each debtor.

We are currently doing our due diligence as we are learn the ins and outs of the debt buying market. In the coming months, we hope to announce a bigger buy in coordination with a report on the role of debt in our dysfunctional healthcare system. We will also be holding a portion of the ever-growing Rolling Jubilee fund in strategic reserve for future debt-buying projects as we continue to learn more about the possibilities of the market.

With love and gratitude, 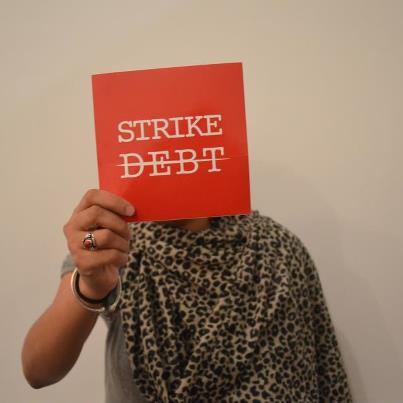