How far to free? 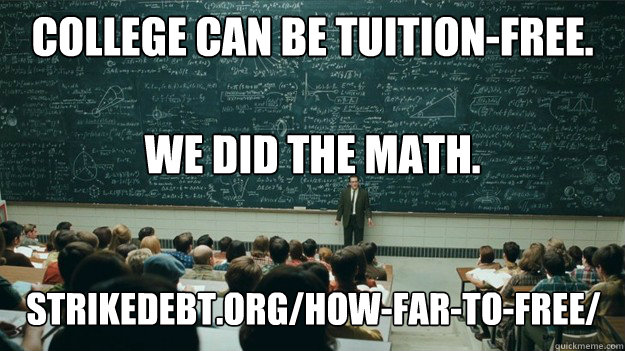 How much would it cost to make every public two- and four-year college and university in the United States tuition-free for all students?  Much less than you think.

According to our estimate, after stripping off the amount that the government already spends to subsidize higher education — including at predatory for-profit institutions — the total amount of new money necessary would be as little as $15 billion a year.  Fifteen billion is a lot of money, to be sure, but within the scope of the federal budget it is a fraction of one percent of yearly spending — merely a rounding error.

Here’s how we arrived at that astonishing figure.

In the 2012-2013 academic year, students spent $61.8 billion on tuition for public colleges and universities (source, page 7).  That’s our starting point.  But, as we said above, the government is already subsidizing that figure via various programs which would no longer be needed if tuition were simply free.  Additionally, predatory for-profit colleges receive billions in federal subsidies which simply channel taxpayer money straight into the pockets of Wall Street investors while saddling students with worthless degrees and a crushing debt load.

In 2012-2013 the government spent $32.3 billion in Pell Grants (source, page 3).  How much of that went to shady for-profit schools?  As much as 21% — more than $6.7 billion (source, table 18) — and a large chunk was swallowed up by Corinthian Colleges, the notorious institution now being sued by the CFPB, SEC, and numerous state attorneys-general for its predatory practices.  In addition, for-profit schools (Corinthian foremost among them [source, page 4]) specifically target veterans for enrollment, and so they took in roughly $1.7 billion in GI Bill monies in 2012-2013 (source, page i).

There is no reason to squander even a penny of public money on these fraudulent operations.  These combined savings would amount to $8.4 billion, which, subtracted from that $61.8 billion figure above, would give us a remaining cost of $53.4 billion for 2012-2013.

But that’s not all.  Bob Samuels, in his exhaustive research on public education financing, identifies tens of billions in additional savings from current subsidies and tax exemptions:

So, in the final accounting:

This means that tuition-free education at all public two- and four-year colleges could be achieved for just $15 billion in new spending. The outcome would be a drastic reduction in the vast student debt burden (approaching $1.3 trillion) — the single most significant step we could take to minimize the scale of the crisis.

Some will say this is a utopian proposition.  But virtually every other industrialized nation (and many a developing country) has managed to offer free public higher education for decades.  Even in this era of fiscal austerity, governments in countries as disparate as Germany and Chile have recently announced they are eliminating tuition costs altogether.  In the U.S. we cannot continue to mortgage the lifetime earnings of students without severely limiting their opportunities and damaging the fabric of our democratic life.

When you hear elected officials and political interest groups agonizing over the intractability of the student debt crisis, while protecting a status quo that funnels money to Wall Street banks and other higher ed profiteers, ask them where their priorities really are.

$15 billion is no more than a line item in the military budget — a 2011 GAO audit found $70 billion had been wasted by the Defence Department in just two years.  $15 billion is also much less money than the federal government currently spends on an array of pointless programs.  For example, the discredited War on Drugs is costing U.S. taxpayers $51 billion per year, much of which comes from state budgets that have drastically cut state appropriations for higher education.  Redirecting this worthless funding stream into a free education system would restore some credibility to the nation’s fiscal priorities.The “Robin Hood Tax,” a proposal to impose a less than ½ of 1% tax on Wall Street transactions, could generate an estimated $300 billion a year.  Those billions, which currently line the pockets of bankers and hedge fund managers, could be used to pay off all existing student debt in about four years.

Federal tax subsidies for corporations add up to $100 billion per year in uncollected taxes (source).  Ensuring that companies pay their fair share of taxation could guarantee fair labor conditions for the 1.3 million contingent faculty members — over 75% of the university teaching force — who make an average salary of $25,000 per year.  Doubling their salaries to match the current median pay for a full-time professor would still only cost $61.75 billion per year (source, page 6).

These are only a handful of alternative funding sources.  If you look around, you’ll have little trouble locating that $15 billion — a small price to pay for the universal, tuition-free public higher education that more and more of the world’s citizenry are demanding of twenty-first century democracies.

It’s simply a matter of priorities.

Researchers interested in learning more are encouraged to read Bob Samuels’ 2013 book, Why Public Higher Education Should Be Free, as well as Mike Konczal’s article, “Could We Redirect Tax Subsidies to Pay for Free College?”